COFIDES contributes over 10,000 euros to a food donation campaign

Madrid, December 22nd, 2020.- COFIDES has contributed over 10,000 euros to the food donation campaign it organised to combat the food emergency currently affecting many people in Spain.

The company's employees, who could choose any entity capable of organising food distribution, contributed 3,404 euros. The company promised to double the amount contributed by the employees, donating 6,808 euros to the Madrid Food Bank​.

The COFIDES chairman, José Luis Curbelo, said that this was "a campaign that once again demonstrates the generosity of COFIDES' employees" and added that "we at COFIDES will continue to support activities to combat inequalities and strengthen aid to the most disadvantaged”.

This initiative is part of the various social actions undertaken by COFIDES as part of its commitment to improving people's lives.

COFIDES is a state-owned company which has been offering financial support to Spanish companies investing abroad. COFIDES is accredited to the European Union (EU) to manage funds coming from the EU budget, allowing the structuring of transactions with a high impact on development. COFIDES is also accredited to the UN’s Green Climate Fund (GCF) and can therefore structure operations on climate change mitigation and adaptation. Moreover, COFIDES is the exclusive manager of FIEX and FONPYME funds on behalf of the Secretariat of State for Trade attached to the Ministry of Industry, Trade and Tourism and also supports AECID in managing FONPRODE funds. COFIDES’s shareholders include Banco Santander, Banco Bilbao Vizcaya Argentaria (BBVA), Banco Sabadell and CAF-Development Bank of Latin America. 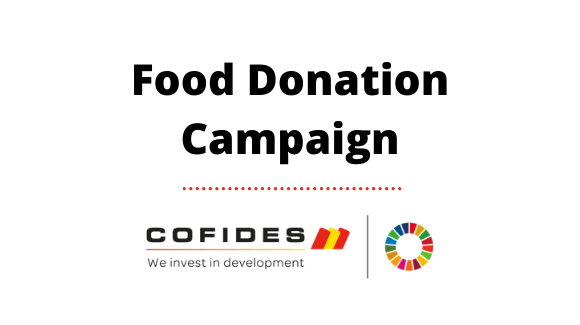