Madrid, 11 March 2020.- COFIDES' is to contribute 3 million euros, via the FONPYME, to the venture capital fund JME Ventures III. It is a new instrument that will be positioned in companies in the early stages of development and will have a target size of 60 million euros.

The fund intends to invest at least 90% in Spanish companies which are in the early stages of their development, mainly in the pre-seed and series A stages. 70% of the investments will focus on information and communication technologies and the remaining 30% on companies that develop B2C or B2B goods or services. The investment from JME Ventures will enable companies to expand, mainly internationally.

This is COFIDES' second investment in a venture capital fund, after its contribution to the Adara Ventures III fund last December. COFIDES launched this new line in order to invest in companies which develop global products and strategies and which are on the threshold of internationalisation. For this, COFIDES uses risk capital management companies with recognised training, track record and solvency for the management of these funds.

The COFIDES Chairman, José Luis Curbelo, said that “with the investment in this fund, COFIDES combines its desire to contribute to venture capital funds and to support the technology sector, backing a new type of company with a digital component and global vocation since its creation”. In his opinion, “COFIDES must contribute to this early internationalisation, which will also lead to improved innovation and competitiveness of Spanish companies".

The Investment Managing Partner of JME Ventures, Samuel Gil, says that “we are delighted to have the support of COFIDES and it will allow us to continue helping those who set up new innovative Spanish companies to lay a solid foundation on which to grow and expand internationally”.

The investments the fund intends to make will impact on SDG 8 (Decent work and economic growth), since it aims to achieve high levels of economic productivity through diversification, technological modernisation and innovation by focusing on sectors with high added value. It will also have an impact on SDG 9 (Industry, innovation and infrastructure) by promoting scientific research and improving the technological capacity of the sectors in which it will invest.

JME Venture Capital is a venture capital fund manager with more than 100 million euros in assets under management, focusing mainly on supporting the best Spanish startups in their initial stages.

As early-stage investors, JME makes first investments in seed phases as well as contributions in larger financing rounds (Series A). Regardless of the size of the initial investment, JME supports companies with the greatest potential throughout a significant portion of their financing life cycle.

COFIDES is a state-owned company which has been offering financial support to Spanish companies investing abroad since 1988. It is accredited with the EU to manage Community budgets, allowing it to structure transactions with a high impact on development. It is also accredited with the UN’s Green Climate Fund and can structure operations on climate change mitigation and adaptation with the GCF. It is the exclusive manager of FIEX and FONPYME funds on behalf of the Secretariat of State for Trade attached to the Ministry of Industry, Trade and Tourism and supports AECID in managing FONPRODE funds. Shareholders include Banco Santander, Banco Bilbao Vizcaya Argentaria (BBVA), Banco Sabadell and CAF-Development Bank of Latin America. 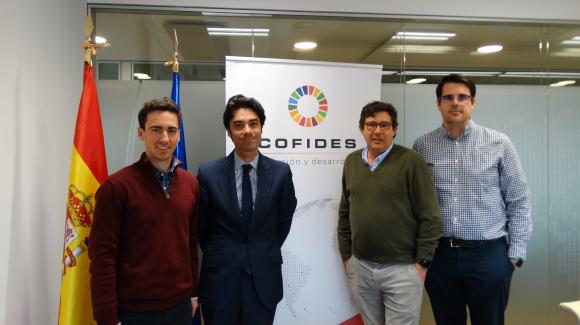