European development co-operation, COVID-19, and how to save jobs in Africa

Covid-19 has hit Africa. Governments are shutting down normal life. The IMF, the World Bank, the African Development Bank and their donors are stepping up the fight against the virus by creating financing mechanisms to support cash stretched governments across the continent. This is much needed - and urgent.

Africa is already facing a dramatic recession, perhaps even worse than Europe. Estimates indicate that at least 20 million jobs may be lost. Much depends on how quickly and decisively we act. Job losses and the resulting destitution will multiply the death toll from the disease. In Europe, governments have responded at home both by addressing the catastrophic threat to health and life, and by simultaneously opening up nearly unlimited credit lines to tackle the existential threat to business from the economic standstill. Most African governments do not have the fiscal space to respond in this way and, across lower income countries, 90% of jobs are in the private sector. For the poor, often in low income and vulnerable jobs, the future looks grim. Women and girl are disproportionally affected.

Firms in the formal sector are vital for prosperity and Africa is already desperately short of them. Such firms are able to organise a workforce to reap economies of scale and specialisation, and raise finance for investment. The huge adverse shock that has hit Africa risks pushing many of them into bankruptcy. This would result in a large loss of organisational capital for their societies. Since private capital is flowing out of the continent, and governments lack both the finance and the organisational links to provide informed finance to firms, development finance institutions (DFIs) are the vital front line in the struggle to preserve them. The institutions in Europe best suited to help the private sector in Africa are the DFIs. There are 15 DFIs in Europe - government owned and supported institutions that foster private sector development. They have €15 billion invested in Africa, reaching thousands of companies, and already fund many banks operating throughout the continent.

Africa needs a policy response as far-reaching and comprehensive as that being taken across the OECD economies: this includes job-support and actions to save existing businesses from immediately closing. If not, Covid-19 itself will set development in Africa back a decade or more. While some support for African nations from international donors has been announced, this support concentrates primarily on the public sector, and what is still missing is a vigorous response to support the private sector and jobs, which face an unprecedented disaster. The private sector in Africa plays an outsize role in providing employment, relative to more developed economies. When even large and profitable firms in rich economies need support to stay afloat, the plight of firms in Africa, which suffer from a chronic shortage of credit and liquidity even in more stable times, is far worse. Unless something is done quickly, many profitable and productive firms will disappear, wiping out years of jobs growth and economic development driven by private enterprise.

The DFIs have rightly taken urgent measures to protect staff and to put plans in place to support clients’ immediate needs. But DFIs also must assess the situation in Africa and the required response in the medium to long term, until the virus has been eliminated. DFIs should be countercyclical at a time when private financial flows have come to a sudden stop, and should lead other investors back into African markets on the other side of the crisis. In order to do this, they will need support. Most DFIs have some room on their balance sheets to respond but often not enough to be fully countercyclical during times of high uncertainty. They need a combination of risk-sharing, capital and new flexibility to respond beyond their capacities in the current stressed situation. DFIs must make this case to their boards and owners and make proposals for a more robust response to the crisis.

Most importantly, governments, as DFI owners and through their donor agencies, need to take steps to reinforce DFIs’ capacities to respond. Governments should replenish capital injections and top-up risk-sharing schemes for European DFIs, while also making more funding available for technical assistance to African businesses. DFIs are the European institutions in the best position to act swiftly in support of the private sector in vulnerable countries by providing emergency credit lines to client institutions before it is too late, something no other institution can do. Doing so is not just a moral duty, but also in Europe’s long-term best interests, as timely intervention could have a transformative impact on Africa’s economies and radically alter their development trajectories towards a more inclusive and sustainable economic model. A strong response will help African economies bounce back on the other side of the crisis. 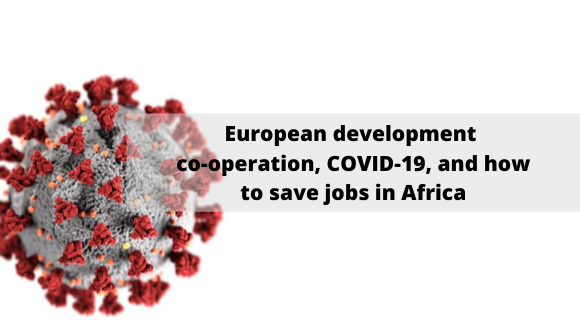